Let me begin this post by offending half of the people who read my blog: I hate gender reveal parties.

I understand completely why people want to celebrate the upcoming arrival of their bundle of joy, and those few details that are knowable before birth. I recognize that it’s nice to have your excitement and enthusiasm shared by others.  I had a Puppy Surprise toy as a kid, so can even appreciate the thrill that comes with seeing that glimpse of pink or blue.  But I just can’t get onboard the gender reveal party train.*

I’ve taken enough Women’s Studies courses to see sex and gender as two very different things.  Sex is physical and biological.  It’s hormones, chromosomes, anatomy.  It’s everything that we learn about in science class.  Gender is social and mental. It’s how we feel about ourselves, and how people tell us we should feel about ourselves as men, women, or otherwise gendered people in this world.  Amniocentesis or an anatomy scan can (sometimes, not always) reveal sex: they can’t reveal gender.

So, it would be more accurate to have a sex reveal party.  When I imagine this party, I imagine a grand affair.  Balloons would be bought from the same stores that supply bachelor/bachelorette parties. Cheerfully hung banners would read: “Based on the information we’ve been provided with, we believe our fetus has XY chromosomes!”  Cake would still be served, but elegantly crafted into the shape of a penis or vulva.  Actually, all of this is tempting me to send out invitations.  But I digress. 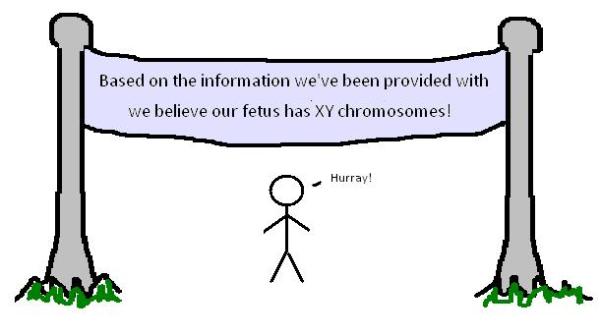 Gender and sex aren’t neatly correlated.  Our queerly gendered bodies and complicated attractions to each other should be a good reminder of this fact. Sometimes sex and gender align, sometimes they contradict each other, and often the relationship between the two is much messier.  Women’s Studies courses aside, I’m reminded of this fact by the fabulous displays of gender that surround me every day.  In my world, gender includes bowties, glitter, femme flagging, suspenders, drag, eyeshadow and sequins.  My own gender doesn’t include all of these things, but is certainly more complex than the cotton candy pink bedroom I grew up in.

Sex, too, is more than an either/or.  Most of us were born into bodies that can be classified without too much complication as male or female, most of our children will be too.  But 2% of bodies defy this classification, and risk being altered or “corrected” from their very first moments because they make our clean categories into a lie.  And among the 98% of bodies that can be assigned neatly enough at birth, there are many that shift later on: surgeries, hormones, electrolysis, binding, tucking, packing being just a few of the ways that people redefine or reshape what was incorrectly assumed at the start.

Which is all to say, neither sex nor gender are choices between two checkboxes.  They are spectrums, not categories.  They are shifting, triggering, affirming, confusing and contradictory.  They exist in the language of “neither”, “both”, “sometimes”, “maybe”.  They are both more complicated than biting into a cupcake to find sugary sweet pink or blue icing inside.

Based on this tirade, you might reasonably assume that Sea and I wouldn’t find out Bingo’s sex. My own mother made this assumption, asking and then immediately responding to her own question, “Of course not.  My gender non-conforming daughter is just going to raise a gender non-conforming child, anyways.”

In part it was to grasp on to one of the few things knowable before Bingo is born.  We can’t know Bingo’s hair colour, eye colour, likes, dislikes, personality.  Even with the availability of 3D ultrasounds, Bingo’s features will largely be a mystery until s/he arrives (I’ve never found ultrasounds particularly indicative of later appearance).    In finding out Bingo’s (probable) sex, we’ve been able to imagine a little more about the baby that will eventually arrive.  We’ve tentatively tested out pronouns, and even potential names.

Finding out Bingo’s sex was also partially about preparation.  Sexism is alive and well, and living everywhere.  It is simple fact that a baby’s sex will impact how it’s socialized from the very start.  If Bingo is seen and socialized as male, we will have to teach him—as two women—how to hold male privilege in this world.  If Bingo is seen and socialized as female, we will have to teach her how to navigate a culture rife with sexism, misogyny and gendered violence.  I know little more about how to teach these realities than I do about holding newborns or changing diapers, but learning Bingo’s sex allows us to begin thinking about how the world will respond to the child we’re bringing into it.

Which is also part of why we’re not telling.

In part we’re not telling people Bingo’s sex because it doesn’t matter.  Though knowing allows us to begin testing out pronouns and potential names, it doesn’t actually tell us—or anybody else—who Bingo will be.   This is made even truer by the fact that often the people asking, “Boy or girl?” are people unlikely to ever meet Bingo: my boss, random Facebook acquaintances, the stranger we bought a stroller from, etc.

We’re also not telling because we don’t want people to think it matters.  A friend of ours recently told us about a friend of hers: a feminist who would soon be having a daughter.  At the baby shower, this woman received not one but TEN adorable little dresses, with each guest insisting that she had to have “just one”.  I don’t want a thousand ‘’Little Slugger” sleepers or “Princess” onesies to suddenly appear in our lives.  As much as I trust our friends to not to do this to us, it’s just so tempting to wander toward girls’ or boys’ departments once you know.  Trust me, I know: just ask me about the tutu I bought for our niece.

There’s also something nice about having something that only Sea and I know.  There will be a time, soon, when everybody will know Bingo’s sex, when everybody will have a name and pronouns to use, when we will be inundated with advice about what girls or boys are like.  But in a process where almost everything is made public, it’s nice to have something that’s just ours.  So for today, Sea and I will keep our secret, quietly trying out names and smiling when nobody else is there.  And if you ask, “Is it a boy or a girl?” the only answer you’ll get is “probably”.

*Don’t even get me started about the number of things that will be lit up pink or blue when the royal baby arrives.  Really, don’t.