Somehow, Bingo is six months old. I want to write a post about her transformation from squishy newborn to funny, active little person, but right now I’m painfully aware of both my overall failure to blog and my specific failure to blog about Bingo’s birth. I’ll begin with the latter in an attempt to remedy the former. Still following? Good!

Bingo’s birth story was mostly written at the time of the event, time- stamped updates typed into my phone by me and then, later, by Sea.  If you don’t want to read it, here is the summary:

After the contractions brought about by induction #1– cervical gel- tapered off, induction #2- pitocin- went ahead as scheduled, beginning on November 21st. Labor was long, painful, and scary at times. It culminated in two hours of pushing, followed by a caesarean after I spiked a fever and labor stalled. Of course, what it really culminated in was the birth of the fabulous Bingo. This end product- and the care/love of Sea, our friends, and our fabulous midwives- make this a happy story, even though, at the time, a lot of it felt like anything but.

END_OF_DOCUMENT_TOKEN_TO_BE_REPLACED

Let’s begin with a bit of history.

As you might remember, six weeks ago the hands of Diet Coke and the student midwife identified the possibility that Bingo was breech.  At 30 weeks, this wasn’t a very big deal– there was still plenty of time for backflips and handstands.

Two weeks later, as the student midwife looked on, Herbal Tea reassured me that Bingo was now head down.

Somewhere around 34 weeks, I went for the then bi-weekly visit to the clinic and met my tertiary midwife.  Based on the scheduling system of the midwifery clinic, it was very unlikely that this midwife would actually have anything to do with the labor or birth of Bingo.  But I met her anyways, just in case.  The tertiary midwife (let’s call her Skim Milk) was friendly, queer, and a good middle ground between Diet Coke’s fast pace and Herbal Tea’s uncanny calm.  As I lay down for the exam, we talked about sperm donors and gay kids’ books.  As the ever diligent student midwife looked on, Skim Milk felt my stomach.  “Hmm”, she said.  She felt some more.  “Your baby has a bony head and a bony bum.  I can’t entirely tell which is which.”  Oh.  Skim Milk explained that she was fairly sure that Bingo wasn’t breech, but that she didn’t want to have missed anything and I should come back a week later to see Diet Coke just in case.

So last Tuesday I did go back to see Diet Coke, just in case.  She felt my stomach carefully, hands cupped around the bump just below my ribcage.  Like Skim Milk, she commented on the difficult task of discerning Bingo’s head from Bingo’s bum, as I made a mental note to mock Bingo for this prenatal quirk frequently (“Bumhead!”).  Then Diet Coke sighed, her tone gentler and slower, “So, I’m about 80% sure that the baby is breech.”  She examined my face for any reaction.  “Maybe 70%.  I want to refer you for an ultrasound to make sure, one way or the other.”

The thing is, despite a healthy dose of sarcasm, I’m an optimist at heart.  So even while two out of three midwives agreed that Bingo was probably breech, I had decided that Herbal Tea was the voice of reason.  There was no way that Bingo was breech!  I half-listened as Diet Coke talked about the decreasing possibility of Bingo flipping, and cheerfully called Sea as I left the appointment to tell her that we were going to get a bonus ultrasound!  Covered by insurance!  Score!

24 hours later I was lying on a crinkling sheet of paper at the clinic where I had, over a year ago, had my very first ultrasound ever.  Sea had been relegated to the waiting room again, and I was sulking a little.  But the ultrasound technician had promised to let her in after the initial scan was done so that we could both see Bingo in action.  I tried to be patient as the ultrasound technician worked silently, screen tipped away from me.  Finally I asked, “So, which way is the baby facing?”  And, despite the large sign on the wall announcing that ultrasound technicians could not discuss the results of the scan, she announced matter-of-factly that Bingo was breech.  Definitely breech.  I had been so certain that Bingo wasn’t breech (Herbal Tea had said) that it took me a moment to process this information.  “You’re quiet.” the ultrasound technician commented, which was slightly ironic considering the fact that this was her third sentence of the entire appointment.  “Oh,” I replied, “I’m trying not to swear.”  Sea was allowed into the room, and we both watched Bingo’s hands and lips move on the screen.  This, along with two grainy printouts, was the only consolation offered by the appointment. 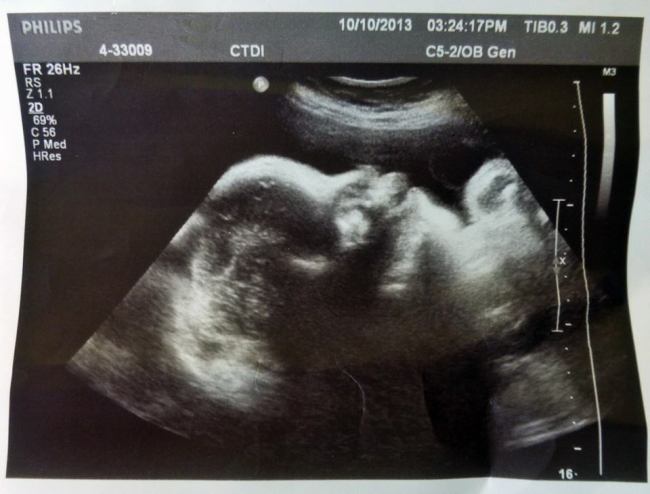 As we left the appointment, Sea asked me how I was feeling.  I was less cheerful than before, certainly, but that could also have had to do with the drying ultrasound gel uncomfortably adhering my shirt to my skin.  I decided that I was fine– that one of our now three midwives could surely make a fetus flip.  The worst that was likely to happen, I reasoned, was a suggestion of yoga, acupuncture, massage, or something equally benevolent.

I’ve spent the last six days in this state of intentionally ignorant bliss.  Sea, on the other hand, (who could be described either as a realist or a pessimist) went home and immediately read everything the internet could provide about breech births an external cephalic versions.

Which brings us to today’s appointment with Diet Coke, which both Sea and I attended.  After commenting briefly on my iron levels (still “very low” but improving!), Diet Coke pulled out the paperwork sent by the ultrasound clinic.  Like any well-trained medical practioner, she started with the good: Bingo is a good size, healthy, with a well-located placenta.  She then moved smoothly into the bad: not only is Bingo breech, Bingo is twisted into an odd position.  One leg is pulled upwards in the traditional frank breech appearance, the other is angled downward.  The chances of Bingo turning from this position with low-level intervention are very, very slim.  Natural birth from this position is potentially unsafe.  Our two remaining options are a scheduled c-section or a referral to a doctor for an attempted external cephalic version (ECV).

While avoiding Sea’s frantic Googling, I had read an article or two about ECV and had imagined some sort of deep tissue massage: maybe not pleasant, but certainly not invasive.  I had assumed that the ECV would either work or not (though, of course, I had really assumed that it would work) and that we could then wait out the rest of the pregnancy in peace.  Not so.  The most reputable doctor who performs ECV in our area does so with the patient not only fully monitored, but with an epidural administered.  If the ECV works (a 50-70% chance), he immediately induces labor so that the baby doesn’t have the opportunity to flip again.  if the ECV doesn’t work and the baby is in distress, he performs an emergency c-section.  If the ECV doesn’t work and the baby isn’t in distress, a c-section is scheduled for a later date– but no later than 39 weeks.  If you’re following along, that means the available possibilities (not even really options, as we’re not the ones doing the choosing) are:

1)  Successful ECV in the next couple of weeks, followed by immediate induction.

2) Unsuccessful ECV in the next couple of weeks, followed by emergency c-section.

None of these options include a fully natural labor and birth, and none of them include carrying to 40 weeks.  While Sea had read enough of Google to be expecting something like this, I was almost completely taken by surprise.  I was almost, barely, keeping calm when Diet Coke suggested that I also stop biking to reduce the risk of Bingo engaging too deeply in my pelvis.  “I’m going to cry”, I said.  And I did.

It’s not that I had envisioned birth in the way that Herbal Tea does.  I hadn’t imagined candles, warm water, soothing music.  As I’ve mentioned in other posts, Sea and I had decided that our birth plan was to have a baby.  Safely.  Probably in the hospital.  But on some level I also imagined having more choice, more freedom, more unpredictability.  I had imagined not knowing the date of Bingo’s birth in advance, going into labor, figuring out what I needed and wanted as the time came.  Now, if I go into labor we’re supposed to immediately go to the hospital for a c-section– telling everybody in our way that Bingo is breech.  I hadn’t imagined much about Bingo’s birth, but what I had imagined wasn’t this.

Poor Sea watched bewildered as I sat crying on the neatly made bed/exam table in Diet Coke’s office.  She reminded me that Bingo is healthy and safe, and that we’ll have our baby soon.  Diet Coke did the same, her voice now almost as gentle and calm as Herbal Tea’s.  “Birth is just the doorway,” she said, “Some people get to go through it smoothly, others bump their heads.  But the rest of your lives is the journey: the birth is just the door.”

And it looks like, one way or another, we’re getting close to heading through it.

Thoughts From The Other "Real" Mom

Speck of Awesome
Winging It
reciprocallove

Lesbian IVF and other stories

Diary of an Overlord

Dutifully transcribed by the Overlord's attendants.

Story of twins a month apart.

Adoption, Down syndrome, 2 moms, and our random life adventures

Gift ideas you can actually buy in Canada

The adventures of two lesbians, four dogs, and one little boy named Simon!

Star In Her Eye

the true tales of my life

a journey to familyhood

the journey of our little family

A little family, a little home, a little romance. The adventures of an immigrant interracial lesbian couple and their adopted children.

Two (Wannabe) Moms on a Journey to Parenthood

Raising our fairy princess, blogging about our adventures after a long infertility journey.